When last we saw Julie, a talking raccoon helped her lead the trolls to the Eastern Rolling Hills. She fell into the creek and was sucked under by the strong current...

Forced down stream under water, my air began to run out. My chest burned with the need to gasp and I distracted myself by singing a song in my mind, the way my dad had taught me when I was little and got scared.
London bridges falling down… falling down…
I lost my strength, gave up fighting the suction and water rushed faster and faster.

Beneath me, the world twisted and turned, a whirlpool reaching upward. I blinked, sure I must be going brain dead from lack of oxygen as a face sped toward me. A lady's face, formed from the water itself, as if every drop had decided to paint dark eyes, a wide mouth, and flowing hair.

She enveloped me and we flew toward the surface, breaking through so quickly the sun struck my eyes and blinded me. I inhaled hugely, filling my starving body with air.

When I could see again, I stood waist deep, the lady of water hovering in front of me. She smiled and beckoned me closer, but where her eyes should have been were only dark holes, as if water couldn’t figure out how to make them right.

Above, a screeching call broke the quiet. We both glanced up sharply. The lagoon was surrounded by huge, leafy jungle like trees. High up in the branches, large nests spanned from one tree to another. Circling above, one by one the ring of birds grew denser and the shrieks became nonstop. One plummeted straight down, his high-pitched scream terrifying me into a crouch.

He swooped by and I cried out in surprise. His wings ended on talon-clawed human hands and beyond a razor-sharp beak he looked at us from a human face. He dove through the lady. A hissing sound, like water on hot metal, filled the air. The bird-man crashed. He curled in a ball as he skipped across the top of the river like a stone.

Clouds of steam billowed from the lady and I watched in astonishment as she split into three, two other ladies appearing on each side of her. Above them, the shrieking turned angry and one by one, the birdmen began plummeting toward me. 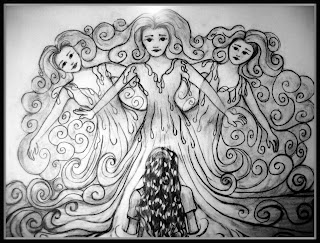 The ladies swirled, spinning faster and faster until I felt the suction pulling me down again. Before I went all the way under, I gasped a mouthful of air and prayed it would be enough to make it wherever they meant to take me.

We turned, their arms enclosing me, directing me to an underground tunnel. I shook my head and pointed to my mouth. I didn't have enough air to go that far.

The lyrical voice didn't come from inside me. Instead, it sounded like stereo headphones—from the water in my ears.

You can breathe with us…

I raised my eyebrows at them. Every itsy bit of my being knew it couldn't be true. What if they wanted me to inhale water just so I would drown?

Nona sent us…
We saved you…
Trust us…

Okay, that helped, but still my body rebelled. I'd swallowed water the wrong way before and it made me cough horribly. My air near gone, what choice did I have? Frightened beyond belief, I decided to give it a try.

Air, beautiful, blissful, precious air filled my lungs, a strange sort of gummy filter over my lips acting like a gill. I opened and closed my mouth, and the film remained—so did my ability to breathe. I grinned and the ladies smiled back, beckoning me to hurry.

I swam with them, our hair floating around our faces, the underwater world full of interesting fish and slanting rays of sun. Until we got to the black tunnel and went inside. I didn't want to get trapped in that blackness and I slowed. As my eyes adjusted, small bluish white shapes became visible ahead.

We went deeper and they turned out to be hundreds of smiling, frilly mushroom-shaped animals stuck to the sides of the tunnel. They gave off a glow, lighting our way. When they thinned out and the water ahead took on a purplish hue, I knew we must be nearing the end.

The ladies twirled around me faster and faster and the filter dissolved off my mouth. Dizzy from their spinning, it took me a moment to realize we had made it through and I stood in knee deep water. We were inside a cave of some kind and my jaw dropped. The walls glittered with beautiful purple crystals.

The gentle slope led to dry floor and I trudged out of the water, amazed by the formations in the vast cavern. The ladies came together, becoming one again. She appeared more real, if still ghostly. She had one violet eye and one green. A transparent hand rose, held the side of my face in a cold wet caress, then she drew away and passed through the cavern wall.

Grandma used to hold my face like that and I placed my hand where hers had been, the skin still cool beneath my fingers. The tears came again and that awful, icky twisty feeling in my tummy I kept getting since Grandma died returned.

I wanted to go home and turned in circles, looking for a way out. I touched the wall where the lady had disappeared and a bit of crystal broke off in my hand. The sparkle didn't fade at all and as I looked closer, it pulsed in rhythm with my heart. What should I do with it? I couldn't just toss it on the ground. I stuck in my pocket.

I knelt and tugged the box free, opening the lid and praying that they weren't destroyed. All of them were wet and I sat back on my heels, ready to cry again. No time for that, I thought, and decided I was supposed to pick the purple ribbon. I took a deep breath, carefully untied the wet ribbon and set it back in the box. The letter itself was soggy and I hoped I'd still be able to read what Grandma had written there.

The ink had run, but holding it close to the wall and squinting, I could make out most of the words.

"In darkness you will seek,
To find your way back home,
While the way may be bleak," I trailed off.

Um… I couldn't tell what the next line was…

No, that couldn't be it. I brought the paper nearly to my nose.

Run! The first word was run, not sun.

I waited for something to happen. Nothing. Maybe I had the wrong ribbon? No, that didn't seem right. I frowned and returned everything to my bag. Maybe it wasn't the wrong note, maybe I just read it in the wrong place?

Before I could head across the cavern to see if that side worked, a horde of bats with long rat-like tails flew into the cavern in a manic frenzy from an opening high in the wall. They dove into another hole about four feet off the ground.

Bats! Okay, that was the way I was supposed to go. I started across, edging around the water when a slushing sound filled the cave. Across the floor, a monster came out of the shadows. The body of a snake and the head of a dragon, it reared up and considered me with a snarl.

"I d-didn't," I said and rushed toward the hole the bats had escaped through. On hands and knees, I scampered like a rabbit from a mad gardener.

"You awoke me from my slumber!" The snakelike creature roared behind me, sliding along faster than myself.

The light changed and the rushing noise of a waterfall ahead led me forward. Only, I ended on a ledge far above a river. I spun, clutching my bag tight to me to face the yellow-eyed dragon-faced snake.

"You dare call upon me and run! A human and a child!"

"It was a mistake. I didn't mean to call you. I wanted Grandma." I inched back.

He reared up as high as his head would allow and roared. Down his gullet, the flames rushed upward from deep inside.

When next I opened my eyes, I stared into those of a tattooed warrior. The sun behind him had sunk low, the sky orange and gold as night approached. My battered body ached and my head pounded. "Who are you?" 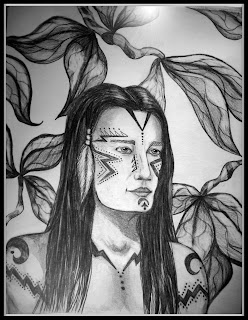 "I am Inti. I pulled you from the river before you drowned. We go now, before the sun sets." He lifted me, throwing me over his shoulder before I could stop him.

My head banged up and down as he ran through the trees. "Oh," I groaned. "Stop, please."

"You angered the beast," he answered between breaths. "She will want blood. We have to get to safety."

Through the jungle he took me until I couldn't hear the river anymore. Night animals called from the dense trees and waxy-leaved bushes.

Just when I though my head would burst with pain, he stopped and stepped onto a raft of branches tied to ropes. We rose in the air and when we neared the top, a whole city of tattooed people stretched in every direction. I remembered the birdmen from the lagoon and had a stab of fear.

He set me on my feet and hung my blue messenger bag over my shoulder. I thanked him and asked, "What is this place?"

"Our shaman said you would come to save the children. You must meet him now."

He spread his arms wide. "There are no children left. They have all been taken."

There were beautiful olive women and men of all ages, but none younger than me. "What happened?"

"Mercy happened." He growled. "My army will take care of her. The shaman must see you now."

He took me to a high point and parted a curtain of dried leaves that smelled like Grandma's spice cabinet. He pushed me inside and nodded.

Designs in red paint dried in the creases of an ancient face. He spoke low and waved me closer. "You are strong to come even before the queen called for you."

"The queen?" What did a queen want with me? "I don't care about a queen. My head hurts and I'm hungry. I want my grandma back and… and it's not fair! She left me with all this stuff and I can hardly read it anymore and I'm all alone and I just want to go home!"

He waved at me to sit on the matt beside him and held up a cup. "This will help."

My stomach growled as I sniffed the warm brew. It smelled like strawberries. "How's this gonna help?"

He lifted a wrinkled, brown hand and pushed the cup toward my mouth. "Drink."

The liquid slid down my throat with a funny aftertaste, like toothpaste or something.

The last he said I barely heard as I fell asleep to the sound of Grandma singing.


Tune in next week for the exciting continuation of Letters to the 5th Direction!
Posted by J.R. Turner at 6:40 AM

Easily I assent to but I about the list inform should secure more info then it has.