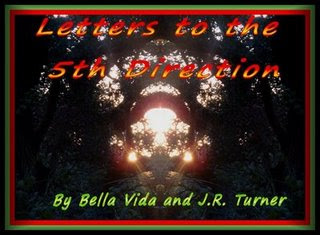 When last we saw, Julie was taken to the village in the jungle trees and met her dog totem, Digel. The Monboy's injured Inti and stole her grandmother's letters. She went out on a limb to get them back, grasping them just before she started to fall...

A hand grasped my ankle and yanked me back into the hut.

Inti had saved me, but he looked angry. "I'm not healed yet and you are in trouble."

He whined and I wanted to apologize. If he hadn't barked for help, I would have a busted skull from a ten-story fall. I petted him, scratching behind the ears. "You good doggie, you."

If fuzzy puppy teddy-bear dogs could smile, Digel did then.

"You have the words," Inti said, nodding to the letters I held in my free hand. "Good. Do not speak those words until we reach the queen. I will take you."

"While you take a kid to see her grandma. I get it."

"You are no ordinary child." The skin over his wound puckered as he straightened. "It is an honor."

"In the morning. Today you will work and tonight need your rest." He went to the door. "Come. We have much to do."

He took me to a round hut with no windows. Much larger inside than expected, I stared in awe. Bows, spears, knives, swords, and a bunch of weapons I didn't recognize covered the walls.

"Your weapons choose you." He smiled. "Close your eyes. It will help you hear."

"I don't think I can hurt someone."

"To save the children, you must close your eyes."

Okay, I closed my eyes, but that didn't mean I would actually use a weapon. "What now?"

"Be still and listen."

"I don’t hear anything."

I figured I better not argue. Music played far off, like a flute, and the melody got louder the more I listened. The music sang, turning me, spinning me and I was glad my eyes were closed.

I opened my eyes. My left hand clutched a spear, painted with the red designs from the shaman's face and ending on a sharp tip. In my right, I held a shiny dagger, its handle sparkling with green and purple jewels.

Inti's eyes were large. "It is true. The blood flows in your veins."

Six tattooed men filed in and stood around me. Inti addressed them. "She has come. You must prepare her while my wound heals. We leave in the morning."

They nodded and Inti turned to me, then walked out. No one would ever say he talked too much.

Unsure what they wanted, I asked, "You want me to help pack?"

They responded with horrified looks, like I just asked them to slice off their ears or something. A taller one said, "You are to be prepared by us."

By sunset I understood just how bad it was. My arms ached, legs burned and shoulders had turned into balled-up bruises. I never knew I had it in me. While I learned to use the spear, I remembered forcing the trolls out of our house. While I practiced with the dagger, I heard Grandma telling me what a big help I was in the kitchen.

From time to time, I caught a warrior staring oddly at me and wondered if I shocked them in a good or bad way.

Hot, tired and sweaty, Digel and I gladly went with the three women who came to get me. They looked so much alike, they had to be sisters. The youngest smiled and said, "Time to rest and eat. We will care for you now."

I yawned and nodded. If I hadn't been so tired, I would feel weird letting the women clean me up. My tummy rumbled as the youngest helped me into a soft dress that almost touched the floor.

A huge feast on a wide platform sent off waves of mouth-watering aromas. The three girls sat near an old man with a huge beads and gold around his throat. "Welcome," he said to me. "I am Chief Tuyen. My daughters have treated you well?"

"Good. Sit and eat now. You have a long journey when the sun rises."

I sat on the nearest empty mat. Everyone brought something to eat and more food lay before me than at Thanksgiving. A bowl of soup gave off the most tempting scent. Without a spoon, I did like everyone else and raised the bowl to sip from the edge. 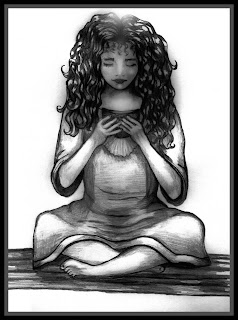 As it came near, I saw more was in the bowl than the soup. A reflection—not of me—but of Mom and Dad talking to police officers glimmered across the surface. My mom looked so sad as the cop handed her the orange ribbon, the one I lost at the cemetery.

Chief Tuyen said, "I will send her a message. She will understand."

"Understand?" I cried. "You don't know my mom. She freaks if I'm even one minute late. I have to go back."

Inti appeared beside me, the wound on his neck gone. "The Queen will care for your mother and father. Finish your food. You need your strength."

He wouldn't budge. I scowled and shoved a huge chunk of bread in my cheek to make him happy.

They didn't let me sleep late. Before dawn, the sisters woke me with a gift. Soft leather shoes, pants and a vest that left my arms free. They even gave me a belt for my dagger.

"Thank you," the youngest sister said.

The middle one said, "For saving the children."

"I miss my daughter and sons," the eldest sister said, tears in her eyes.

Inti came into the hut. "Time to leave."

Ten warriors, three of them women left with me and Digel. Even at this early hour the jungle floor felt hot and sticky. We walked in a quiet line, half the warriors in front and half behind me, Digel at my side. The two men in front used machetes to cut a path and as the sun hit the dewy plants, I imagined them slicing through the thick humidity.

Just when I decided I couldn't take another step, Inti demanded we rest. I sat on a log and he handed me a weird balloon of water.

"Drink," he said. "We need to cross the sky bridge soon. Can you walk faster?"

I drank and gave Digel some before I returned it to Inti. "I don't know. How far away is it?"

"We need to be there by dark." He raised a hand, fingers spread, and everyone immediately got to their feet. "This way."

He led us uphill. In an hour, breathing became hard. Digel suffered too, slowing to keep pace with me. Inti pointed to a spot beside a large boulder. "We are almost to the sky bridge."

Thank goodness! I could make it that far. "C'mon, Digel. Almost there."

At the top, the amazing view halted us. Rolling hills, winter lands, a spray of colorful trees, and in the distance, a waterfall made me wish Grandma could be there with her favorite camera. Only she died and now there would never be anymore pictures.

The sky bridge spanned a chasm miles deep. I squeaked, "We have to cross that?"

He laughed. "We are lucky. Sky bridge has ropes to hold."

Nothing lucky about this.

Three men started across. I wished I had a leash or something for Digel, just in case. A woman went next. Inti motioned me forward. "Do not look down."

I grasped the ropes slightly above waist height and tested the first board. Solid. A few feet in I got the hang of the sway and bounce of the bridge. This wasn't so bad, really. Digel whined and started after me. I waited for him to catch up and when he did, he began barking and growling.

Inti joined us. "Please quiet him."

Before I asked what the heck a Wira was, one of those birdmen from the lagoon swooped down and Digel barked more frantically. Above, a whole flock of Wira took to the sky. I watched in horror as one dive bombed the man behind Inti. 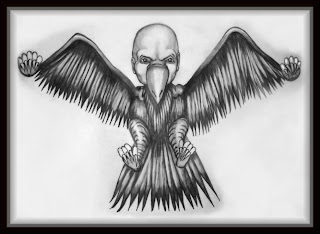 "Behind you," I cried and drew my dagger.

Too late, the Wira clawed at the man's eyes. Blinded and forced off balance, he fell from the bridge, his scream drowned by others as the flock attacked.

Inti pushed me even as those in front ran back to help. "Do not stop. Get off the bridge!"

A Wira landed on my head, his long beak stabbing at my face. I cried and thrust my dagger into his chest. He squawked and I flung him aside. Digel barked, then bit the taloned leg of another coming after me. He shook the ugly, human-faced beast over the edge, but it flew back.

We rushed as fast as a jumble of people could. A woman fell, her back shredded by three Wira. I turned away, sickened.

One flapped in front of my face and I slashed its throat in a move taught to me by the dead warrior. Blood covered my hand and I wanted to weep as it raggedly flew sideways, then fell from view. The other side looked so far away. How would we ever make it there?

Tune in next week for the exciting continuation of Letters to the 5th Direction!

I'm loving this. It's a perfect Saturday serial. Just like watching Saturday TV serials in the old days. Thank you. :)