Funny thing happened this morning. I was thinking about my published books, books I’m currently writing, and books I plan to write, and realized they all have very strong leading ladies. These girls are not damsels in distress, they are dames who distress others. In fact, my first book (unpublished) featured such a strong heroine, that I had to create a whole alternate lifestyle in order for her views to make sense in the context of the time period.

From there, I was unstoppable:

Bulletproof Bride: Mina, an out of work waitress who uses a gun to ‘steal’ her life back.

My Biker Bodyguard: Biker and tattoo artist Jesse fights to survive the hit ordered on her.

DFF: Dead Friends Forever: Kaylee may only be fourteen, but she’s already one tough cookie, and will only get stronger with every book.

From there, the books I have in progress and in the idea bank for future works include:

The rewrite of Racing the Moon: Amanda is a science geek, but she’ll do what it takes to cure the Alaskan Inupiat of the Lycan Virus.

My Twins Book: Lucy is a twin, with a strong psychic connection to her sister. When she’s released early from prison, she learns there are strings attached—namely hunting down her sister who has a highly important government secret coursing through her veins. (I’m really excited about this one.)

My Post Zombie Apocalypse Book: A cross between Mad Max and 28 Weeks Later (though more like 28 years later) starring Morgan, a female soldier who learns too much, becomes a threat to the political machine controlling the remaining population, and gets fed to the walking dead as punishment. Only…she doesn’t die.

And currently, I’m halfway through Extreme Hauntings Book 2: High Spirits, where Kaylee starts serving her time at Barclay Hall, a fancy boarding school for wayward girls—and one overflowing the spirits of dead children.

As you can see, each of my heroine’s has one thing in common—they are not the sort to sit back and hope someone else saves the day. This got me to thinking about what I’m trying to tell the world about women, what my message might be, because obvious there’s something I want to say if I keep finding my literary passion ignited by the strong female lead.

I’m not some uber-feminazi that hates men and never shaves my legs (do they even really exist?) So it doesn’t have anything to do with some odd distaste for the male gender. Actually, I’m a big fan of men in general. I have a long list of “hotties” (all of whom I respect as professional actors or models!) that I greatly admire. My husband topping that list, of course! 

I’m also not attempting to overcome some great idea that I’m a victim of some sort, where I need to live vicariously through my characters to seek some strange revenge of imaginary people. Some of which happen to be women, in fact, in the Knight Inc. series, the biggest baddie in the bunch is a woman.

So why in the world am I so compelled to keep writing these leading ladies as strongly as I do?

I think it’s because I didn’t realize my own power (as many people don’t) until I was much older, maybe in the last ten years or so. It would have been nice if I could have lived strongly all my life, but I won’t lie and say I have. I’ve known cowardice and weakness—but through those experiences, I learned how much I lose when I give in to those very human emotions.

Only through courage, strength, fortitude, and heart have I gained all that’s most precious to me, and had far fewer regrets than before. I think in my books, I want to show people, my female readers in particular, that it’s okay to take a stand, to demand better from yourself and others, to assert ourselves and make sure we are not those good women who stand by idly while evil happens.

Or worse, depend on others to battle that evil.

It’s worse because there is no ownership of our lives, of our communities, of how we are responsible for more than our own happiness and wellbeing, but also for our impact on our environment. We hear a lot these days about leaving as small a footprint as possible on the earth, that we should recycle and live green. Yet rarely do we have conversations about how we impact our social environments and the choices we can make to ensure we are a positive influence.

In the end, maybe that’s my underlying PSA to the world: Be part of your community, know your own power, and never expect others to do what you are fully capable of yourself.

Or something like that. Maybe I’m just overanalyzing things this morning. Maybe it’s only because I love excitement and blowing things up, beating up bad guys and fighting off supernatural entities is a pretty cool way to spend the day :)

Hey everyone! :)
You can preorder your paperback of DFF: Dead Friends Forever, the first book in the Extremen Hauntings series today! :) 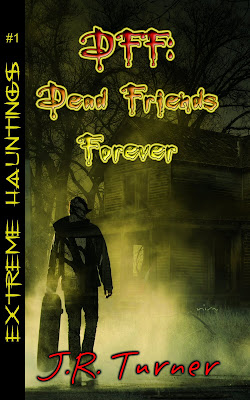 Visit my official website to read an excerpt!
Posted by J.R. Turner at 7:21 AM No comments:

I want to Interview You!

Would you like to appear in an upcoming book in the Extreme Hauntings series? Asia, Kaylee, and T.J. appeared in the first book, DFF: Dead Friends Forever. Fill out the interview below and your name could be given to the next new character!

What do you love:

Would you like to be notified if you’re name is included in an upcoming book?
If so, please send the interview and an email address where you can be contacted to jturner4@charter.net
Posted by J.R. Turner at 3:38 PM No comments: