I've been wanting to blog about this for the longest time! Jenny Siler, one of my most favorite authors, attended Bouchercon this year. After getting to watch her hold her own as the only female suspense author on a very talented panel during the conference, I was ecstatic to have her sign my all the books I own by her. You can just imagine my elation when she invited me to have lunch with her and her friends! I was over the moon!!! :)

I got way nervous though, when I found out we were having sushi. I had never eaten sushi before, let alone ordered it! Everyone was really terrific in introducing me to what has now become a real favorite of mine. I especially love the "California Roll" and found that I can't get enough of the wasabi. It's super for clearing out your sinuses! Since our lunch together, I've even been practicing using chopsticks and have now gotten those tricky suckers about mastered.

I think the most interesting thing was listening to the conversation. I had read Jenny Siler's biography at her website and in her books, and it was odd to recall so much of what she chatted about--as if, in a way, I knew her. She's written about many of the places (all over the world) that she's been to, using them as settings in her book in such a way, that at the mere mention of an 'adventure' she had there in real life, I could totally *see* what she was referring to. I loved that I could really feel a part of the discussion that way.

Her friend, Laura Benedict, was truly warm and welcoming as well. She took the picture of Jenny and I together below. If it weren't for her very nice offer to do this, and then sending me a copy later, I wouldn't have this very cool keepsake ;) Thanks again Laura!

And Thanks to Jenny Siler, for treating a fan to a great time!!! :) 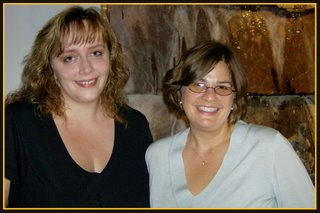 I'm so happy to announce that I fixed the problem on my blog so that you no longer have to scroll way down to view the posts. Unfortunately, the only way I could rectify that was to delete a few of the images I had on here, but never fear, there are links to where you can view these images in their place ;)

I'm also glad to be back to blogging after a long delay. I'm going to be updating my website very soon and will then link to the great photos I've got to share with y'all! Including an amazing one of me with Jenny Siler, a fabulous author that if you haven't read her and love 'action' heroines who are deep and complex, you should definitely read soon. "Flashback" and "Easy Money" are definitely favorites so far! Check out her website here.

I'll be back soon with more news!!