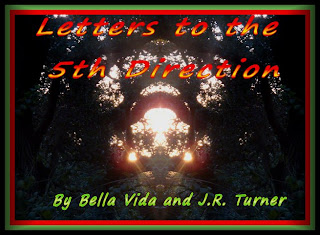 Episode #7: To Grandma's Castle We Go
by Bella Vida and J.R. Turner

When last we saw Julie, Inti stood in the snow, surrounded by snarling wolves...

Inti's men commanded their horses into defensive positions. The wolves bared massive canine teeth, yellow eyes glowing as they snarled and growled. Heads slung low, the six slunk toward Inti. The warriors raised their weapons and I gripped my spear.

A loud howl broke the silence, followed by another and another. The hairs on the back of my neck prickled and I did my best not to scream, to be brave and not show fear as I turned and looked back. A dozen more wolves stood in the snow behind us. These weren't the beautiful beasts at the zoo back home, but fearsome creatures with snapping jaws.

Two warriors blocked the wolves from the front, giving Inti time to jump on his horse. Digel barked madly at first, then leapt onto my horse, startling the big animal. I crouched low over him, wrapping my free arm around his warm tummy.

A wolf leapt and bit a meaty chunk out of the nearest warrior's leg. I threw my spear and it pierced the wolf's side, but the scent of blood brought its brothers on us. They attacked horses and warrior alike.

Inti yelled, "Move!" and slapped the back of my horse.

I held tight to Digel and the reins, flanked by a man and a woman warrior, as my horse raced far into the forest, into the darkness.

We rode for hours until the sun sank just below the tops of the trees. Exhausted and thirsty, to my relief, the guards halted us when we came on a small stream. We let the horses drink while Digel and I shared apples and bread from my messenger bag.

"How far away is Crystal Castle?" I asked.

He didn't understand but from his hand gestures I guessed we were supposed to wait for the others to join us. Side by side, Digel and I drank from the shallow stream. I hoped Inti and the others were okay and kept glancing back to where we had come out of the forest, hoping for sign of them.

Digel brought me a stick and I smiled. "Want to play?"

He yipped and wagged his tail. Always trying to cheer me up, I thought and threw the stick. He brought it right back and we did this until a cry from the air startled me. After the Wiramen, I'm not a huge fan of birds.

The lady warrior whistled to a hawk, who called back. The exchange went on for another few seconds and I watched amazed. Then both warriors gestured for me to get back on my horse. I wanted to protest, to say we had to wait for Inti, but from their worried faces, I decided not to try. One of these days I would teach them my language or learn theirs, this lack of communication sucked.

At the end of the forest, glowing green hills lead into a valley and beyond that, the towers and spires of a castle rose to the clouds.

"It's Crystal Castle!" I yelled with excitement and pointed.

Their eyes widened with horror.

My shout gave us away. I covered my mouth, "Oh no."

A shriek carried from the forest on a gust of wind.

"What was that?" I whispered. 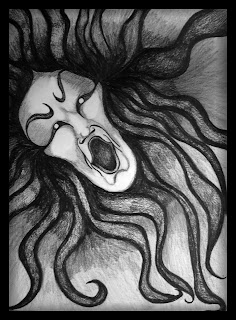 The horses nickered and whinnied, uneasily clomping in the shallow water. From the blackness between the trees, a shadow moved. A mad scream hurt my ears as a wailing face flew at me. I ducked so low, I slid off my horse. The shadow looped back, screaming horridly and I ran, icy water soaking my boots. Ahead more shadows lurked in the trees, their faces pale and filled with soulless agony.

The male warrior halted my headlong dash. Digel went by, barking at the shadow until it returned to the forest. He growled low and though they moved from trunk to trunk, they didn't come back out again.

The lady warrior whistled again and a white owl flew out of the pines. She secured a note to its leg and set the big bird off again. I watched it go, shocked to see the beautiful white feathers turn into the leathery large wings of a bat as it headed for Crystal Castle.

"We are almost there," Inti said behind me.

"Inti!" I spun and returned his happy smile. We were reunited again, his men behind him. "The castle is just down this path. Are you ready?"

"Yes," I said happily and mounted my horse. Together we all rode, Digel trotting eagerly beside us. Just as the sun began to set, we reached the dazzling Crystal Castle lit by thousands of golden rays.

Ecstatic, I hurried off my horse and burst through the outer wooden doors. "Grandma! Grandma! I'm here!"

The wide foyer had the shiniest floors I've ever seen. Two large doors stood on opposite sides of a wide staircase. I ran up the stairs as fast I could. The second floor lay open to the cold air, no walls, just large archways and columns. Across the black and white tiles, a golden jeweled throne sat high above an ornate altar where a sparkling crown rested on velvet. 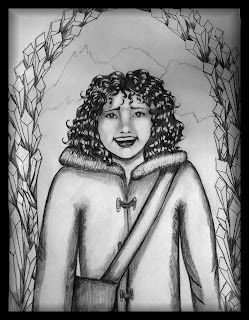 "Grandma!" I shouted with delight.

She stood, young and beautiful, wearing wonderful robes. At the altar, she said, "Darling, you made it. Just in time. The ceremony begins tonight. The stars and planets are aligned. Julie, you came through for me."

I raced to her, Digel barking loudly behind me. My grandma, alive and here! My heart burst with joy.

From the columns, two crystal soldiers broke away, and stopped me from reaching her by crossing their pikes to bar my path.

She gestured to the crown and I peered past the crystal soldiers. All the jewels in the crown glittered atop its pink velvet pillow, except for one. The largest one, at the center of the uppermost point was missing. I remembered the Shaman and what he said about how the ceremony couldn't begin without the stone.

"You see, darling," Grandma smiled. "The crown must be complete before we can begin. We need the ruby heart."

She gave me such a look, my pulse pounded. "But Grandma, I didn't know I was supposed to bring it to you."

"You have brought it to me. You had it all along." She laughed, but it wasn't my Nona's laugh at all. A horrible and strange cackle I recognized from the awful face made of herbs back at Inti's village. "All we have to do is slice open your chest and cut out your heart."

Digel barked furiously as Mercy, the jealous hag who wanted to destroy my beautiful Nona and now me, shed the skin of my grandma and revealed her true self.

Tune in next week for the exciting conclusion of Letters to the 5th Direction!

This is good stuff, J.R.